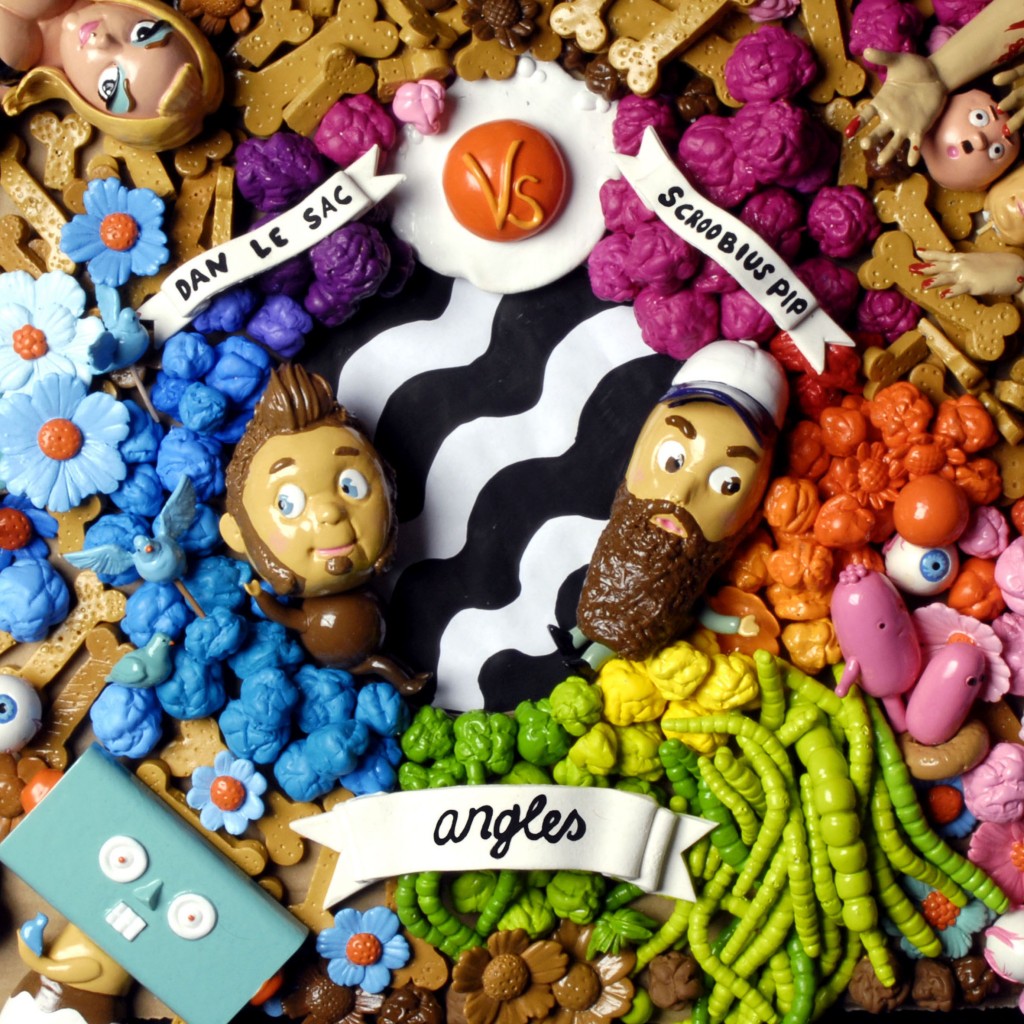 dan le sac Vs Scroobius Pip debut album ‘Angles’ is out now on CD, 2xLP and Download. The limited edition 2×12″ vinyl LP version includes a free CD copy of the album plus a lyrics poster. The iTunes version of the album comes with two bonus tracks, two videos and a digital booklet. Not wanting to be left out, theCD version comes with a 16 page booklet featuring all the lyrics.

“Silently I step up with a subversive subtext, trying to feed the need for more than just remedial subjects.  I place my faith in the belief that the general public, will open up to more than just an industry puppet” – WAITING FOR THE BEAT TO KICK IN

In constant contention with perceived wisdom and at issue with the sanctity of pop-culture’s sacred cows, dan le sac Vs Scroobius Pip have become the new faces of ‘outsider pop’.

Visually they defy any prefab industry model, their towering structures of Casio enthused electro-hip-pop are alien to the conventions of Radio programming, and their lyrics even dare to ask questions of themselves and the listener. And yet they have become airwave and chart regulars, responsible for 2007s salient singles THOU SHALT ALWAYS KILL, BEAT THAT MY HEART SKIPPED and the Radiohead sampling A LETTER FROM GOD TO MAN.

Shunning the major label overtures that inevitably followed Messrs le sac and Pip opted to sign to Rob da Bank’s Sunday Best label, ensuring that their eagerly anticipated debut album ANGLES, is now one of the key independent releases of 2008.

Both hailing from Stanford-le-Hope in Essex, Scroobius Pip’s unique delivery style was developed on the burgeoning spoken word circuit. Fused with dan le sac’s industrial and conversely elegant electro and hip–hop grooves, they have created a distinct 21st Century cocktail, crafted both in the studio, and the back of Scroobius’ Toyota Space Wagon as they journeyed between Glastonbury, Latitude and Bestival; toured with Mark Ronson and Lethal Bizzle; and completed their own tour with a sell-out show at The Scala.

If ‘Thou Shalt Always Kill’ provided the ‘beginner’s guide’, then this album represents the broader, deeper and ever more thrilling indictment, enthused with a wit and hubris that is entirely their own. Opening with a typically defiant ‘I ain’t gonna take it no more…’ before lurching into ‘Beat That My Heart Skipped’,  “An uptempo lament on the perils of one Britain’s most sadly embraced pass times – going to clubs to pick up girls”, it is an album instantly subversive with its dry wit and immediate beats.

The title track and ‘Magician’s Assistant’ cut straight to the core of individualism and media induced inertia. The notion ‘Just a band’ is given a musical tongue-in-cheek with the monumental sampling of Radiohead’s ‘Planet Telex’ and in an affectionate parody of Dizzee Rascal’s play for the masses, ‘Fixed’ adds a knowing look to the debate on ‘sell out’.

Scroobius even deploys an unlikely ally in his battle with ‘skin-deep’ on Tommy C, “Tommy Cooper is a metaphor for beauty… a swipe at the generic offering of many a pop crooner.  Original title – ‘James Blunt can fuck right off’.” Alongside the dancefloor mess of ‘Back From Hell’ and ‘Rapper’s Battle’, lead single LOOK FOR THE WOMEN brings the soul and warmth of personal sentiment in what Scroobius describes “the love song for those sick of love songs”.

Here is an album beyond pop whimsy, novelty, cynical crowd pleasing or resting on musical laurels, and yet at its centre is the core accessibility and fun of pop.  With the direct lyrical approach of Scroobius Pip and the complex musical blueprint of dan le sac, they have created an album of unrivalled challenging pop music.

Their live show of miscellaneous props, humour and crushing instrumental breakdowns goes on tour in April, as they release the album’s lead single ‘Look For The Woman’ on April 28th on Sunday Best.

1. The Beat That My Heart Skipped